A massive 7.2 earthquake struck Haiti on Saturday, August 14, 2021 leaving more than 1400 dead, thousands more injured and these numbers are expected to rise. Tropical Depression Grace, according to the National Hurricane Center in the U.S., may cause flash flooding and mudslides when it lands this week as the island continues to reel from the July assassination of its president, Jovenel Moise.

Compassion for the Haitian people, in the form of practical humanitarian aid, is what is needed right now. Donate to reputable organizations like Haiti Action Committee’s Haitian Emergency Relief Fund and Man Dodo Humanitarian Foundation as they understand the lay of the land and can get help to the people as quickly as possible.

It is not enough for the Biden administration to wax poetic about being a “close and enduring friend to the people of Haiti”. The Biden administration must extend and expand Temporary Protective Status (TPS) for Haitians as a reprieve to those here in the US which will also have a positive ripple effect on Haiti through remittances. Additionally, the US government must allow Haitian asylum seekers across the U.S. border and offer them asylum without detention. Finally, all deportations and expulsions of Haitian nationals must cease immediately.

In the wake of the federal recognition of Juneteenth as a holiday, deep racial injustices continue to plague the nation and we await action.  Black immigrants continue to face heightened detention and deportation under current policies. Federal immigration legislation introduced and under consideration perpetuates anti-Blackness in our immigration system by prioritizing the policing and criminalization of Black people. Consistent with this administration’s stated commitment to racial equity, it must act by establishing immigration policies that focus on repairing the damage inflicted on Black people, including Black migrants, by eliminating those policies that criminalize, exclude, and separate Black migrants from communities and by instituting policies that are anti-racist and humane.

The Black Alliance for Just Immigration (BAJI) is a racial justice and migrant rights organization which engages in education, advocacy, and cross-cultural alliance-building in order to strengthen a national movement to end racism, criminalization, and economic disenfranchisement in Black immigrant, refugee and African American communities.

We are writing today as we launch the Until We’re Free coalition to urge you to pursue restorative immigration policies that are rooted in human rights and human dignity. A foundational element of immigration policy is its grounding in the experience of Black immigrants.  The Until We’re Free coalition will chart a new course for racial and immigrant justice in this country centered on the critical needs and demands of Black people regardless of their citizenship or their interactions with the criminal legal system.

Specifically, we call for the following actions:

The Until We’re Free coalition was formed because it is time to rethink the archaic criminal provisions frequently included in federal immigration legislation and instead focus on modern community-led, transformative solutions that improve our lives and communities. It is time that our immigration laws are free from anti-Blackness and that immigration is centered as a racial justice issue.  We urge you to take action to support your stated commitment to addressing the legacies of racism and white supremacy in this country by supporting these transformative changes and using your power to chart a new course for racial and immigrant justice in this country.

Signed in solidarity by the following immigrant and civil rights organizations and leaders :

On Monday 19th July, 2021, the Department of Homeland Security announced an 18 month extension and redesignation of Temporary Protected Status (TPS) for qualified migrants from Somalia. The extension will be in effect from September 18, 2021 through March 17, 2023.

The TPS redesignation is welcome news for the large number of Somali nationals who, even though eligible, have been unable to apply for TPS since 2012. Under-documented and undocumented Somalis in the US – many of them having been victims and survivors of ongoing civil war and other humanitarian crises like drought and famine – continue to face detention and deportation to Somalia.  The TPS extension in turn offers temporary reprieve for Somali nationals who, though already on TPS, remained anxious about their immediate future.

However, due in part to criminal bars written into most immigration policies, many undocumented Somalis will remain ineligible for TPS despite this redesignation. We continue to argue that these barriers to protection from detention and deportation are antiBlack measures.

Throughout US cities, Somali nationals continue to face Islamophobia and xenophobia. Specifically, the various iterations of the Countering Violence Extremism (CVE) federal program continue to criminalize Somali immigrants, stripping many of them of their green cards, and rendering many of them deportable.

Somalia continues to be a battleground for the US’s “war on terror”. US authorities know that current conditions in the country have left hundreds of thousands of Somalis vulnerable to the consequences of extreme conflict. Somali nationals fleeing to safety should not be punished for seeking asylum and protection.

Wednesday, July 14th 2021- The Black Alliance for Just Immigration is alarmed at the Biden administration’s pronouncement that the US will reject Cuban and Haitian asylum seekers despite both countries’ current heightened humanitarian crises.

The head of the Department of Homeland Security, Alejandro Mayorkas said “Any migrant intercepted at sea, regardless of their nationality, will not be permitted to enter the United States.” The U.S. Coast Guard will be monitoring the US coastline to prevent asylum seekers from entering the US.

These remarks and policies are unacceptable particularly for an administration that touts to care for human rights and racial justice. All refugees, migrants and asylum seekers are entitled to the human rights of international protection, the right to seek asylum and the right not to be forced to return to their home countries arbitrarily.

Nana Gyamfi, BAJI Executive Director: “Mayorkas’ latest comments are continued evidence of President Biden’s anti-Blackness and immoral disregard for the right to asylum. Biden and Mayorkas continue to enshrine historical wet foot/dry foot racist policies, but because these particular Cubans are not white elites their feet are considered wet and unwelcome.”

President Biden’s anti-Blackness – his utter indifference to Black suffering and denial of Black people’s right to exist – is the only explanation for how the Cuban-born Mayorkas, whose family sought asylum from Cuba by air, can fix his mouth to tell Haitians and Cubans not to seek that same refuge that his family benefited from just because they are coming by sea.

Since the killing of George Floyd, Black people across the US are leading uprisings demanding justice for the endless police murders of our loved ones. Around the country, we are organizing in the streets demanding a new vision of public safety that is not centered around policing.

Violence and racism pervades the policing and court systems. Black immigrants are disproportionately stopped, searched, arrested, and killed by the police. Like all Black people in America, Black immigrants are also over-represented from arrest rates to sentencing. 76 % of Black Immigrants are deported because of contact with the police. We are constantly forced to contend with the truth that we cannot address systematic racism without confronting the police in Black communities.

There have been some developments–including calling for a federal ban on police chokeholds and rejecting qualified immunity–but these do not go far enough to address the reason why we are in the streets. Many of the recent police reforms suggest that law enforcement needs more resources to do their work. They call for the hiring of more police officers, more police training, and more research into police “best practices.” These reforms are out of touch with the reality that policing is the problem in Black communities, not the solution.

BAJI will continue to demand that the investment of the millions of dollars proposed for more policing instead go to resources that will improve the quality of everyday life of Black people in this country. We support legislation, such as the Breathe Act, that is aimed at diverting funds from law enforcement and investing in anti-poverty programs that actually makes us safer. 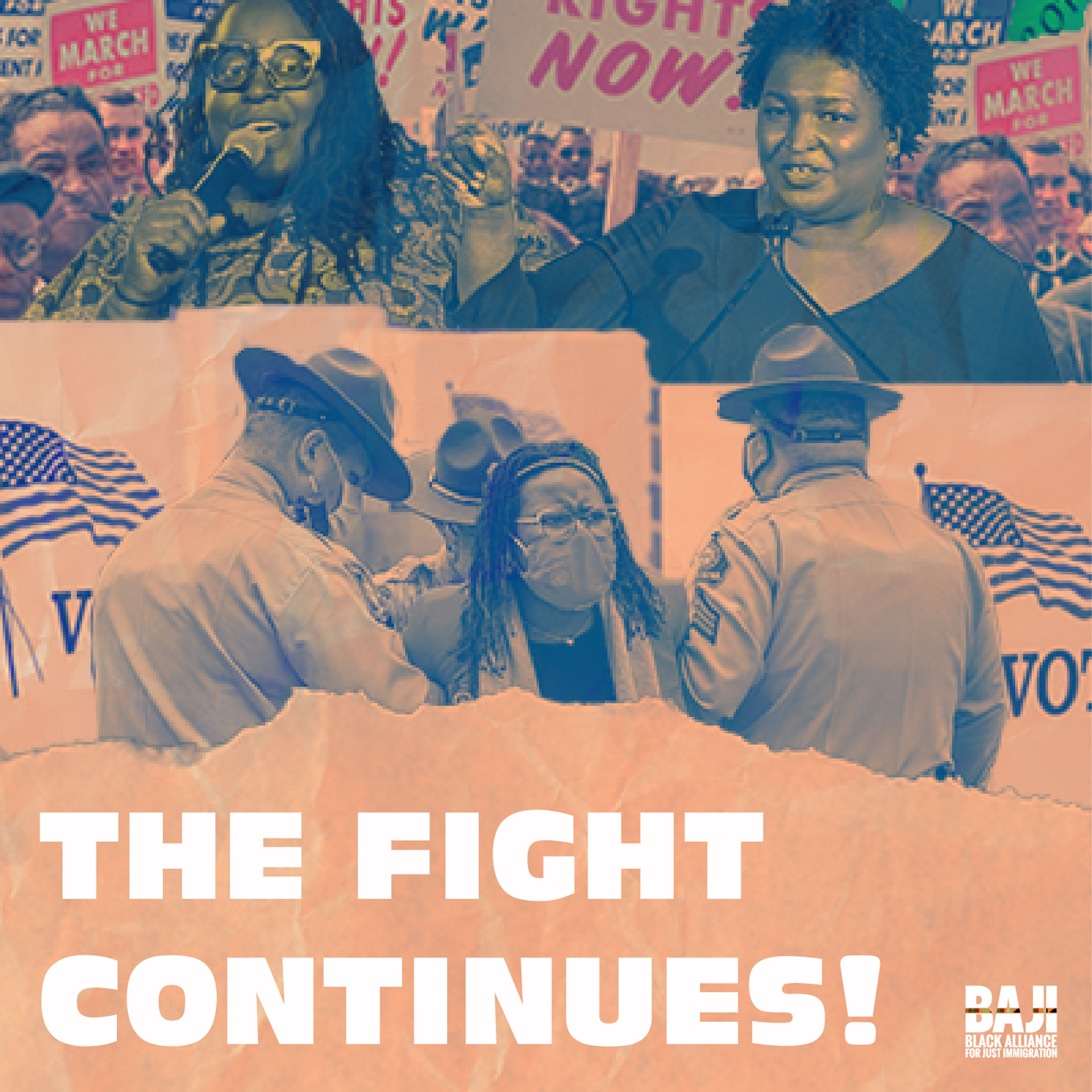 In an act emblematic of voter suppression and political oppression of Georgians, state troopers arrested a Black legislator, Rep Park Cannon (D-Atlanta) as she protested the signing of the bill.

Listen, this is white supremacy in manifestation. Sure, we knew that white supremacy would not go away with the ousting of Donald Trump as president, we are still outraged.

At the same time, these events are a call for us to expand the reach of our organizing efforts and recruit even more people to fight for a freer Georgia.

At this moment, the work is clear: we must continue to build our base to fight back and we must advance a bold and progressive vision of the kind of Georgia we want to live in. BAJI is doing just that and we are inviting you to join us. >>>>Follow this link to sign up!

P.S
Bring your cousins and em’ with you as well!

BAJI: The Dream and Promise Act is Anti-Black

The criminal bars in the Dream and Promise Act reinforce the racist US carceral system. Black people with one felony, three misdemeanors, or who have been accused of gang involvement will be rejected from the Dream and Promise Act outright. The current surge of immigration bills being introduced, supported, and glorified prioritize the policing and criminalization of Black people as the primary trade-off for the path to citizenship. In short, these bills are anti-Black. We denounce these immigration bills because we seek justice for Black people.

Like all Black people in America, Black immigrants are over-represented from arrest rates to sentencing. 76 % of Black Immigrants are deported because of contact with the police. For fifteen years BAJI has been raising the alarm on the criminal bars still abiding in the 1996 immigration laws that center the role of the carceral state that effortlessly separates, excludes, and expels Black people from communities.

It is hurtful that our allies would push these immigration policies while acknowledging the devastating impact of the racist criminal legal system that targets and kills Black people.

In the course of President Biden’s political career, he has designed and endorsed policies that have harmed Black people. He has supported, authored, and championed laws that expanded mass incarceration, increased police powers, and exacerbated racial disparities in surveillance and sentencing. We are not surprised but amazed that his policies continue to break apart Black communities. President Biden, who has said that Black people ‘brung him to the dance’, needs to immediately address anti-Blackness in his policies and its devastating impact on Black lives in the United States.

It saddens us that the visionary work of human rights activists for the last few decades has yielded no new vision in the immigrant rights movement.  It is time to rethink the archaic criminal provisions frequently included in federal immigration legislation and instead focus on modern community-led, transformative solutions that improve our lives and communities. We need restorative policies that are rooted in human rights and human dignity. BAJI will continue to chart a new course for racial and immigrant justice in this country centered on the critical needs and demands of Black people regardless of their citizenship or conviction.